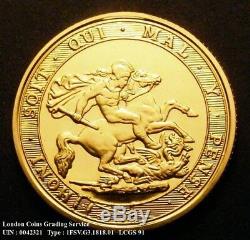 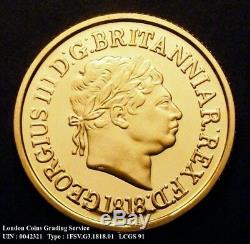 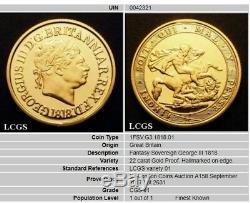 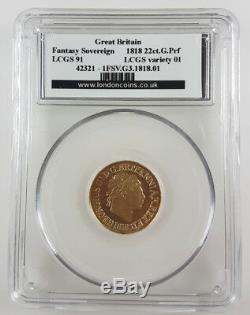 1818 George III Gold Sovereign AFDC Modern Proof Pattern Pobjoy Mint. George III's long reign was marked by a series of military conflicts involving his kingdoms, much of the rest of Europe, and places further afield in Africa, the Americas and Asia. Early in his reign, Great Britain defeated France in the Seven Years' War, becoming the dominant European power in North America and India. In 1776 the Declaration of Independence was adopted by the Continental Congress on July 4, 1776, the 13 American colonies severed their political connections to Great Britain. In this year 1795 Eleventh Amendment to the United States Constitution was ratified.

A series of wars against revolutionary and Napoleonic France, over a twenty-year period, finally concluded in the defeat of Napoleon in 1815. King George III to the left a marble Queen Charlotte Console to King George III below. The only one so far graded by LCGS hence their finest known. A modern copy of the rare 1818 sovereign, Lustrous AFDC and graded LCGS 91. Around MS66-67 in the US grading system.

A very high quality modern reproduction made by the famous Pobjoy Mint in around the year 2000. It has been made to very high standards by Pobjoy to similar specifications of the original 1818 sovereign 8.26 grams in weight and solid 22ct gold.

A very limited edition only 250 of these modern 1818 reproduction sovereigns were made. LCGS rigorously checks the authenticity and they will not encapsulate any coins if they have any doubt as to its authenticity, so buyers of coins encapsulated by LCGS can rest assured that a professional third party company has authenticated the coin and graded. Hence a LCGS encapsulated coin is a safer investment than a raw uncertified coin. Check out my investment coins in my shop.