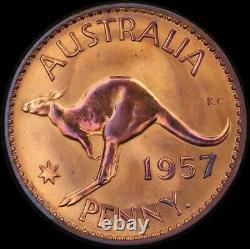 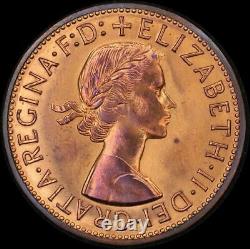 1957 Perth Proof Penny about FDC. Obverse: Bust of Elizabeth II to right, legend around. Reverse: Kangaroo to right date; denomination and legend around. Flashes of lustre across both sides. There are several reasons the Australian pre-decimal proof coins struck between 1955 and 1963 remain popular with collectors more than half a century after they were struck.

They're scarce - no more than a few thousand coins were struck in each year and many were far less than that. This means it's challenging but not impossible to get attractive-looking coins at the right price. The series is short and sweet - Australian pre-decimal proof coins struck between 1910 and 1954 are out of the reach of most mortal collectors, so the run between 1955 and 1963 has long been a popular area of focus for many collectors. The rarity is known - there are obviously many scarce Australian coins struck for use in circulation in the latter part of the 20ty century, but the thing is the mintage figures aren't always a great guide to just how many are available to collectors.

The mintage figure for each and every QEII pre-decimal proof coin is known, which makes things a lot simpler for many collectors. They look fantastic - Not only are these coins struck to a far higher standard than the equivalent circulating coins, when they've been carefully stored they retain fantastic lustre and patina. Research has shown that production of Australia's 1957 proof pennies was split into two main batches - 470 were made during 1957 and had smooth fields, while 642 were struck across 1958 and 1959 with matte (frosted) fields. As the images here show, this particular coin is the latter type. Lorem ipsum dolor sit amet, consectetur adipiscing elit.

The item "1957 Perth Proof Penny about FDC" is in sale since Wednesday, September 16, 2020. This item is in the category "Coins\Coins\Australian\Pre-Decimal". The seller is "sterlingcurrencyau" and is located in Fremantle, WA.