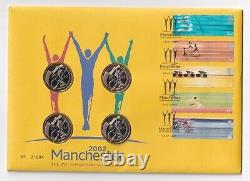 Please also note all non payers will also be banned from using our site in the future. Feedback is automatic after you leave it for me.

The item "2002 MANCHESTER COMMONWEALTH GAMES 4 x £2 COIN COVER SET TWO POUND PNC FDC" is in sale since Thursday, April 1, 2021. This item is in the category "Coins\Coins\British\Decimal Coinage (c.uk2014" and is located in TEWKESBURY, Gloucestershire. This item can be shipped worldwide.