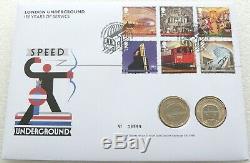 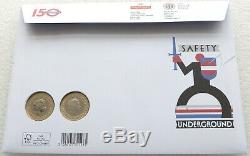 Weight: 12.00 Grams Each / Diameter: 28.40mm. The reverse of the first coin designed by Edwina Ellis depicts the London Underground Logo and carries the edge inscription Mind the Gap. The reverse of the second coin designed by Edward Barber and Jay Osgerby who as also designed the London 2012 Olympic Torch depicts a 1967 Victoria Line Train and uses texture and perspectives to reflect the light and create a sense of movement. It also carries an unusual edge pattern inspired by Harry Beckís iconic Tube map The obverse of both coins depict Ian Rank Broadley's stunning portrait of Queen Elizabeth II.

The seller is "thelondoncoincompany" and is located in London. This item can be shipped worldwide.