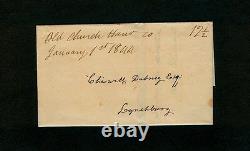 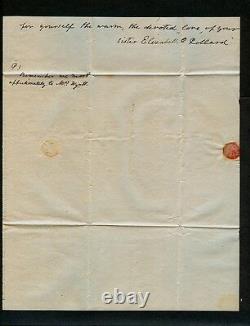 Fresh and Crisp "Old Church Hano Co January 1st 1844" New Year's Day cancel in manuscript for this Hanover County, VA town on a wrapper addressed to Chiswell Dabney in Lynchburg. This is actually the last page of a letter signed Sister Elizabeth P. Pollard used as the actual wraper for the full letter.

This is an original sheet of paper (it's real deal--this is NOT a reproduction) called a "wrapper" that was folded by a letter-writter to resemble an envelope and to contain a now-gone letter after it was written to be taken to the post office by and mailed. It is a stampless folded wrapper.

You are purchasing only the postal portion, as pictured and described below. I do not have the letter. Once the letter was written, the entire item was sealed by the sender with a drop of sealing wax to seal the letter to provide security.

Postal history because of the rates, markings and usage. This particular item has a highly-desirable "manuscript" town marking. This is a full wrapper, not just a front or small portion. This item is in the category "Stamps\United States\Covers\Postal History".

The seller is "ivymontcpa" and is located in this country: US. This item can be shipped worldwide.